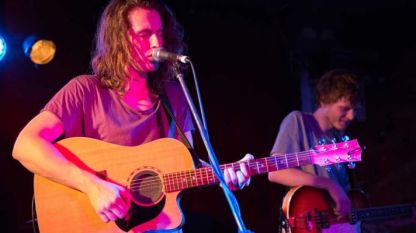 To promote his new single, Roskie, and to celebrate the end of exams, local artist Riley Pearce invited friends to enjoy a little bit of surf-rock, and Mojo’s could barely contain the crowd.

By 9pm, there were people wall-to-wall showing their support for all three acts, starting with New Zealand-born Logan Crawford. The singer-songwriter had a gentle and friendly presence as he played an acoustic guitar with only one person accompanying him on keys. Opening with Patience, he kicked off a set in his emotive style. He admits to taking joy in writing songs about home in order to make his mother cry, and brought an earnest sigh with his single, Breathe.

Man of the hour, Riley Pearce, did not give himself an introduction but merely led his band in an upbeat rock set, continuing to thank people throughout his time on stage, with comments like “You have no idea how happy I am to see people here.” Even with his ongoing promotion and business card laid out on every table, he seemed to doubt a genuine turnout, but it was a full house. His songs were beautifully written and the whole band performed them well. It was a fantastic line of pop-rock songs with heartfelt intent accompanied by friendly, sometimes bashful, banter. This particular single was inspired by a trip to Montana that Pearce wanted to share with Perth, if not the greater public. There was a lot of new material included and solid guitar-picking from the man himself. He finally concluded the set with the single Roskie, “We are just fools in love.” If only he knew.

The Stillwater Giants completely broke any awkwardness in the room after the crowd thinned out, post-Pearce, and their personalities were priceless. They opened with Not Like The Others, a great indie-rocker and brought ample attention when they tried to get Pearce back on stage slurring, “We all want to have sex with you Riley, where are ya?” Needless to say, the singer remained incognito. After figuring out among themselves who should start the next song they blasted into another vibrant tune and this more or less went on for the rest of the evening, with or without a decent crowd. They certainly deserved to rip up the stage like a dinner that had served two courses, only to become a food fight. Delicious.