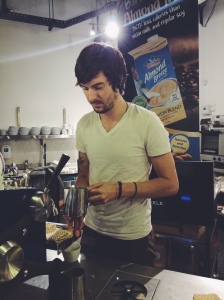 Using the ploy of free food and beer, they managed to haul about 50 people who were buzzing with excitement to see how Perth’s best baristas would tackle the challenge. Standing Room Only employee Travis Sinnel asked the obvious question, “What’s the point?” – the prize was $500 and the satisfaction of creating art can from the most unlikely of places. 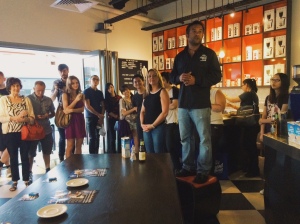 MC Jared announced twenty-four competitors, hailing from selected cafes in Perth such as Typika, Sprolo, The Imp, Standing Room Only and Addison and Steele. Five Senses representatives also attended. The night began with a ‘Rookie Round’ and a few drinks before the real games began – each barista was expected to create a different design each round. 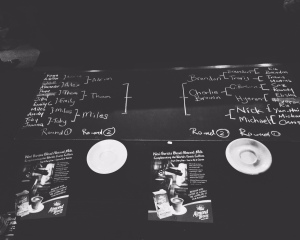 Australian Latte Art Champion Rie Moustakes was eliminated early into the night but got another chance as a wildcard entry. Addison & Steele’s Michael Munroe was subject to a little harmless heckling. At the end of each round, the three judges – Jared, Renee and Phil – placed their promotional Almond Milk USB in front of the winning cup. Designs such as love hearts, swans, lotus flowers and even a single dot in the middle of the cup surfaced, and there were a lot of close calls. 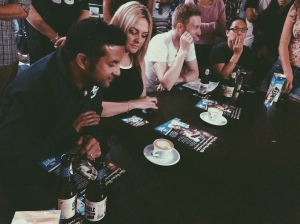 As the free food and beer was passed around, the crowd became more and more boisterous. One of the newest employees of the Addison & Steele family, Miles Murray, and Charles Stewart from Five Senses made the final. Both were given the opportunity to make two coffees and pick their favorite with the option to also etch additional designs if they felt it would give them the upper hand. Both cups were presented to the judges and after great anticipation from the audience it was announced that Miles had won in a 2 to 1 vote. He took home a $500 prize and a shiny new jug. 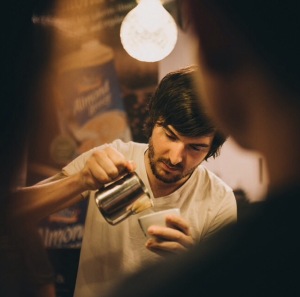 “I honestly was not expecting to win,” said Miles, “I was trying not to freak out.” Everyone put in a great effort and displayed ample entertainment for the spectators, encouraging growth in the Perth coffee community.

Emilie is a barista, avid coffee lover & a junk food connoisseur. This is her second article for {perth·coffee·project}.